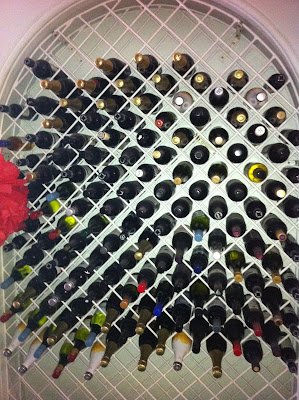 Phew. It's been an eventful few weeks. Leaving aside the renovation and Christmas, we've had doggie dental surgery, house inspections, landlords announcing a return to Australia and pre-school decisions to be made.
This last week has been a particular rollercoaster with a surprise house inspection, the first progress payment for the renovation, and our eldest dog needing six teeth removed.
Surprise inspection I hear you ask? The agent promises they wrote to us about it weeks ago, but we didn't get the letter. Suffice to say the 'courtesy' reminder call half an hour before they turned up sent us into a spin. Especially given Mr Puddleduck was at work and Puddleduck and I were having lunch with a gorgeous little man and his Mummy. Why the spin? Because our dogs aren't official. I know, I know. Serves us right.
Had I not been smack bang in the middle of it I suspect it would have been an hilarious episode of slapstick. Mr Puddleduck leaping out of a taxi and crossing the lounge room in a single bound whilst grabbing leads and throwing dog food and bowls into a container to be hidden upstairs under beds and behind shoes in cupboards. Then, just as Puddleduck and I zoomed up in the car he sprinted out of the front door with three uber-excited cocker spaniels hyped up out of their minds at the thought of a middle of the day walk.
I then scooped up any further evidence of dogs (photos, hair, treats etc) while simultaneously bribing Puddleduck with the 'biggest treat in the world' if she promised solemnly not to mention puppies AT ALL. I soon realised asking a 3yo not to mention something was akin to asking Basil Fawlty to not mention the war, so I changed tack. Something along the lines of 'don't talk to the ladies coming to the house soon because they are very naughty and Mummy doesn't like them at all' ... I know, I know. She'll be in therapy for years.
Inspection over we waited for the hammer to fall. I was ready with the story of my friend in throes of a 40 hour labour and with noone else to care for her dogs. I was ready to deny all existence of dogs. What came next was an utter surprise. Our landlords have been transferred back to Australia as of March next year. Our agent was most apologetic and seemed as surprised as us. March is better than next week - but gosh it's going to be a close run thing with the new place.
I need a drink.
Posted by Puddleduck at 4:21 PM